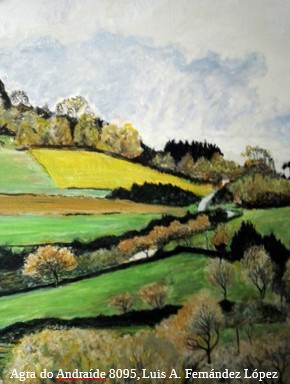 Sixty years after that of Iglesia Alvariño, a new Galician translation of the Peruigilium Véneris is on the street, accompanied by the Latin text, renewed with thoughtful fidelity to the original and its transmission, and by a Spanish translation, with the same will of fidelity and simplicity, and emulation of its sonority and rhythm. The short song is a joyous reflection that encourages celebration and love in a natural landscape, in successive moments, from the almost winter forest to the rose garden, and from the origins of the world to Roman history.

The mythological adornment, with the mention of Venus / Dione and the evocation of the Sicilian prairies, less fresh and more flowery than those of the Peruigilium Véneris or that our agras -A Agra do Andraíde, on the cover- has been overpowering the interpretation of a work that, like those of Sidonius or Dracontius, handles the literary tradition at the service of new ideas of vital and familiar continuity and of concern for the stability of Rome.

We do not believe that until now the authors who have dealt with this poem have stopped to listen to the song of the nightingale that sounds – also unequivocal, in its longing for silence – in its last verses and makes the poet forget his task and doze off on arrival of the dawn.